Home News The Coming War On Cash – The Next Step In Government Control! 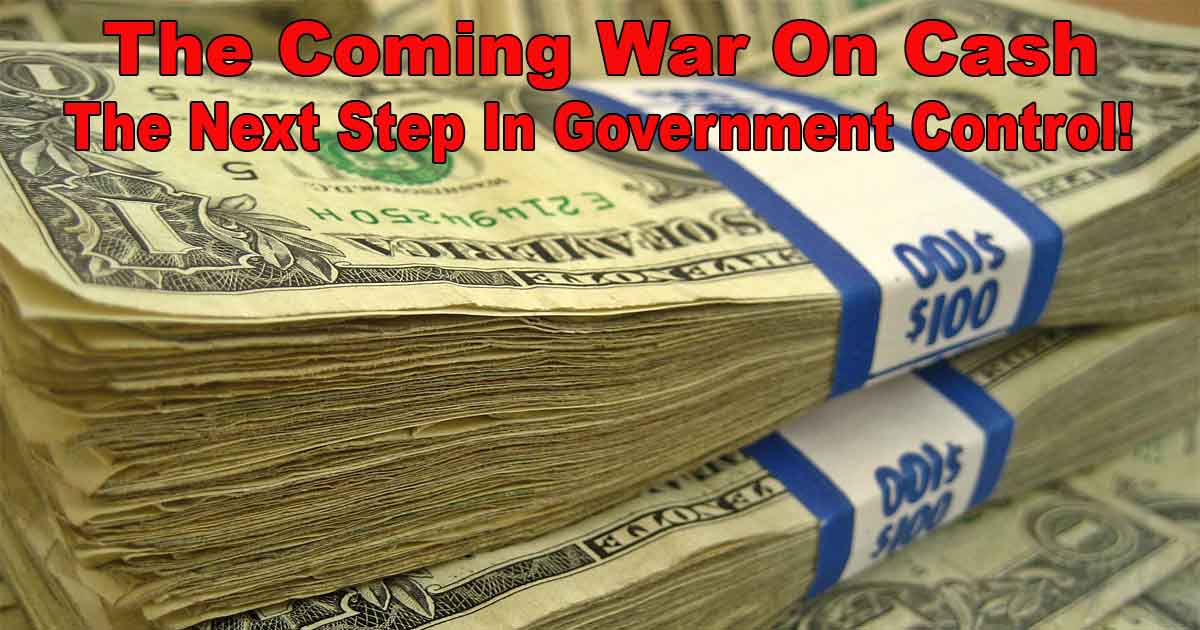 As the economies of the world continue to struggle, governments do what they do best – find ways to take more of their citizen’s money.

And, to effectively take more of our money, they need to exert more control over our lives. That means your government wants to know exactly how much you make, how much you spend, what you spend it on and how much you have left over to keep for yourself.

Because, only when they have absolute control over your finances, can your friendly, local tax collector make sure you pay your absolute, maximum “fair share” of taxes.

One of the biggest obstacles standing in the way of complete control of your finances is the existence of that pesky old thing we call cash. Because cash represents freedom – the freedom for individuals to transact business without government intrusion, the freedom to choose to keep as much of your wealth as you like (outside the banking system that many don’t trust) as well as the freedom to buy and sell whatever you like, without anyone being able to track your activity.

Governments hate that kind of freedom, and they have plans to take it away from you.

If you haven’t yet heard the phrase “war on cash”, allow us to get you up-to-speed (because you will definitely be hearing more about it in the future).

First, let’s start with our friends in Europe:

A huge economic experiment will begin in Switzerland and Sweden in 2016, and some people are calling it the “war on cash.”

Many Swedish businesses are cashless, so you need electronic cash in the bank in order to buy anything. If you use too much cash in Sweden, banks may call the police because they think you might be a terrorist or a criminal.

Earlier this year, Citigroup Chief Economist and former Bank of England policy maker Willem Buiter published a paper in which he advocated abolishing physical currency altogether. His concern was a technical argument about giving central banks more freedom to drive borrowing costs below zero. The existence of cash sets a lower boundary to central bank policy, because you can avoid the penalty of negative interest rates by holding physical currency rather than having money in a bank account. Buiter argued that the benefits of a cashless society outweigh privacy concerns…

Last week, the influential Financial Times newspaper ran an article calling for the abolition of cash. It was titled “The case for retiring another ‘barbarous relic.’” And it claimed that cash causes “a lot of distortion in the economic system.” Can you believe it? Cash causes economic distortions!

It also repeated the familiar claims that cash also is what finances terrorism, tax evasion, and the black market. Making cash illegal, it says, would “make life easier for a government set on squeezing the informal economy out of existence.”

You see where this is going, don’t you, dear reader? If the feds are able to ban cash, they will have you completely under their control. You will invest when they want you to invest. You will buy when and what they want you to buy.

You will be forced to keep your money in a bank – a bank controlled, of course, by the feds. You will say that you have “cash in the bank,” but it won’t be true. All you will have is a credit against the bank. (Bank deposits are nothing more than IOUs from your bank to you.)

So, pay attention to what’s coming – we need to stay vigilant because they’re always coming for our freedoms!