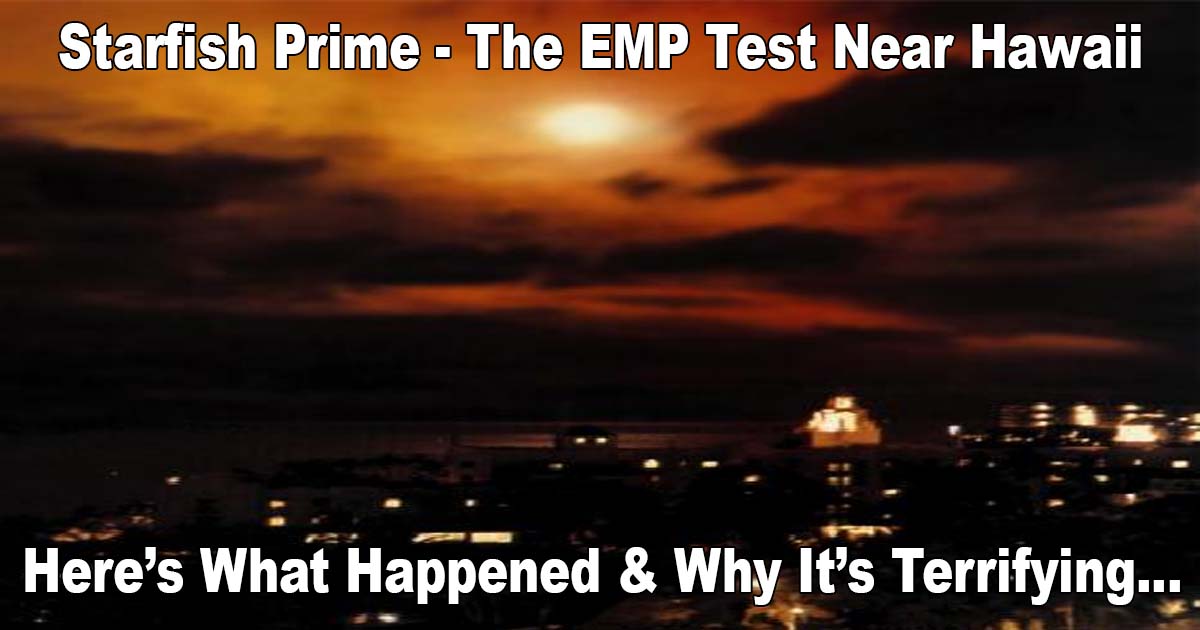 One hour before midnight on the evening of July 8, 1962, a 1.44 megaton thermonuclear bomb was detonated 900 miles from Honolulu at an altitude of 250 miles.

Code named Starfish Prime, the test was the United States’ first look at the potential devastation of an EMP device detonated over (in this case it was 900 miles away) America. The test was monitored by hundreds of scientific instruments and produced surprising results.

Despite the relatively small size of the warhead (in today’s terms) and the primitive nature of 1962 electronics, here’s what physicist Dr. Lowell Wood, testified to Congress about Starfish Prime:

“Most fortunately, these tests took place over Johnston Island in the mid-Pacific rather than the Nevada Test Site, or electromagnetic pulse would still be indelibly imprinted in the minds of the citizenry of the western U.S., as well as in the history books. As it was, significant damage was done to both civilian and military electrical systems throughout the Hawaiian Islands, over 800 miles away from ground zero. The origin and nature of this damage was successfully obscured at the time — aided by its mysterious character and the essentially incredible truth.”

Quoting from the FutureScience.com paper on the subject:

Several countries have produced single-stage nuclear weapons with energy yields of well over 100 kilotons. These would be much more efficient at producing EMP than the Starfish Prime detonation.

Today, if just one of these 500 kiloton bombs like the Mark 18 were detonated 300 miles above the central United States, the economy of the country would be essentially destroyed instantaneously. Very little of the country’s electrical or electronic infrastructure would still be functional. This is not to say that every device would be destroyed, but the interdependence of different electrical and electronic infrastructures makes it possible to stop nearly all economic activity with only limited damage to critical infrastructures. It would likely be months or years before most of the electrical grid could be repaired because of the destruction of large numbers of transformers in the electric power grid. Several countries today have the ability to produce a weapon similar to this 1952 bomb, and send it to the necessary altitude.

The possibility of an enemy detonating an EMP over the United States and crippling our electrical grid remains one of the most terrifying large-scale survival situations we could face. Our country is poorly prepared for such a scenario.