Home 2nd Amendment Hillary Wants To Bankrupt The Gun Industry – You Need To Know This! 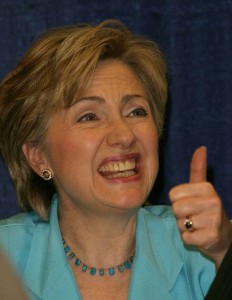 Hillary Clinton is well on her way to landing the Democratic nomination for president, which means she could very well be our next commander-in-chief.

And, that could mean very big trouble for your 2nd Amendment rights!

The right to bear arms is under constant threat.  There are many large, well-funded groups that would love nothing more than to limit, or even eliminate, your right to responsibly own firearms.

So far, these groups haven’t been able to achieve their plans through a frontal assault on the 2nd Amendment, but now they’re working on a new strategy – trying to make gun manufacturers legally liable for crimes committed with their product.

If they’re successful, the trial lawyers will go wild, suing every gun manufacturer right out of existence.

Hillary is fully on board with this attempt to sabotage the 2nd Amendment and put gun manufacturers out of business.

Notice she uses the phrase “unique immunity” in an attempt to confuse the issue.  What would be unique is holding a manufacturer liable for the illegal use of their lawfully produced product.

However, that’s exactly what Hillary, and her supporters, want to do to gun manufacturers – hold them liable for damages if their product is used illegally.

This is a clear attempt to circumvent the 2nd Amendment and needs to be stopped!

We need your help getting this information out to your friends and family.  Please share this article with those you care about!