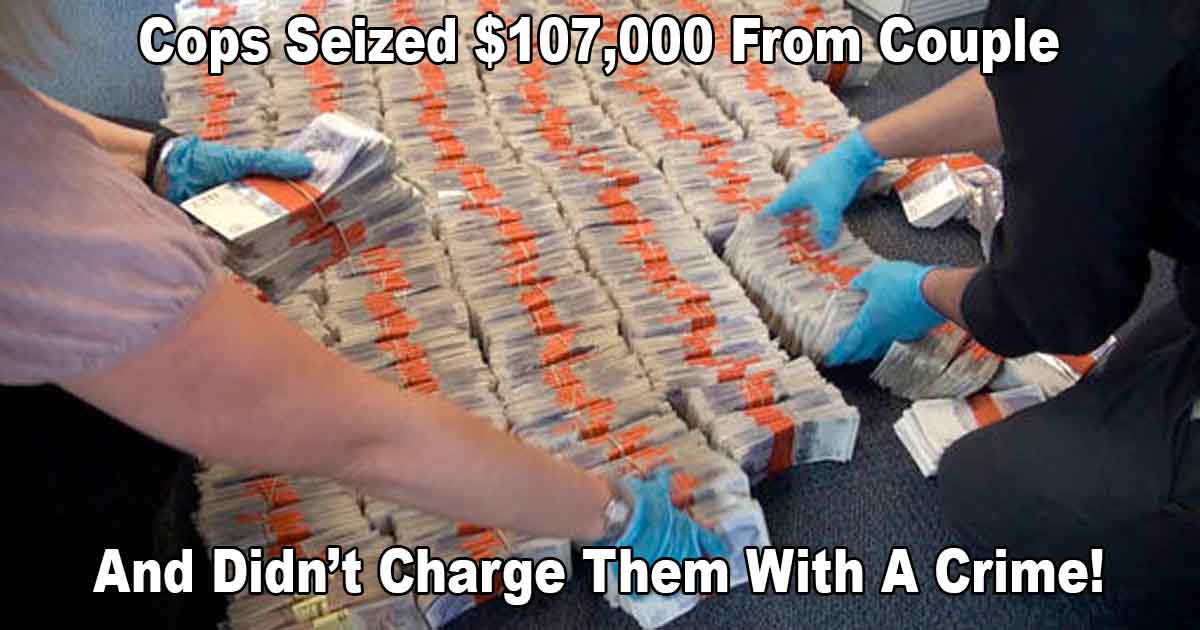 A Massachusetts couple driving through Illinois had $107,000 in cash seized by police and were never charged with any crime!

For the past three years, Adam and Jennifer Perry have been fighting the State of Illinois to get back the cash they had seized from them during a traffic stop.

The cash was taken from them using civil forfeiture laws that have come under heavy scrutiny lately. In fact, it’s been reported that in 2014, U.S. law enforcement took more property from it’s citizens using these laws than were stolen by criminals.

Surprisingly, under these laws, property owners are not presumed innocent and do not have a right to an attorney!

This video illustrates the scope of this issue:

From the Institute For Justice’s article concerning this case:

The Perrys said they were headed to Salt Lake City, Utah to see a hearing specialist for an ear infection Adam was suffering from.

A drug dog sniffed and indicated on the car. Officers then searched the vehicle and found $107,520 in cash in a suitcase and in Jennifer’s wallet. The Perrys claimed the search was without their consent and without a warrant. According to the officers, they also found a duffel bag that reportedly smelled of marijuana.

No drugs were found in the car, nor did the government file criminal charges against the Perrys. Nevertheless, officers seized the cash and eventually transferred it to the federal government.

In a letter filed earlier this month, Adam claims that the taken cash came from savings and disability settlements and payments. “Our faith in the United States legal system has been shaken. Why are officer’s [sic] allowed to be judge, jury and executioner on the side of the road?” the Perrys asked in a 2013 response to federal prosecutors.

Unfortunately, their case is not unique. An extensive investigation by The Washington Post into one federal forfeiture program found nearly 62,000 cash seizures since 9/11 where police did not use warrants or charge the owners with a crime. Out of those seizures, more than 1,700 were in Illinois alone.