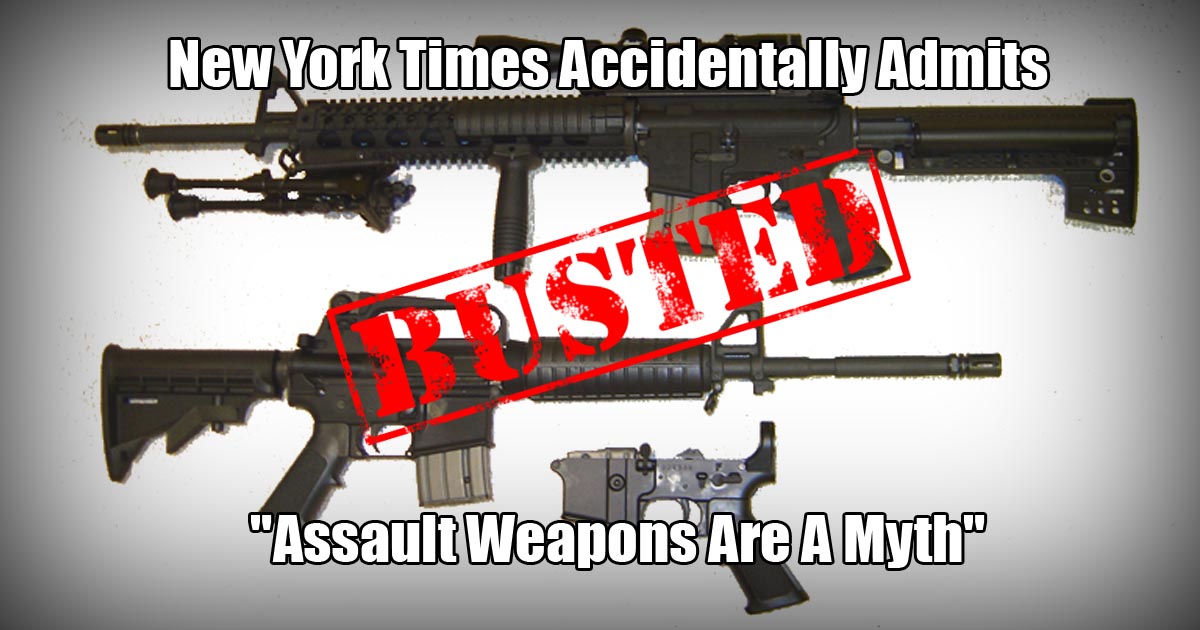 3 things are guaranteed in this world: death, taxes, and attempts from the left to take away our god-given right to bear arms.

As predictable as the sun rising from the east and setting in the west, you can count on the media to relentlessly blast us with claims that ‘assault weapons’ are worse things created since the Nazi death camps and therefore should be banished from this earth entirely.

But what the heck are assault weapons anyways?

Incredibly, the New York Times recently published an article where they admitted that the term “assault weapon” is a fabricated term created by anti-gun Democrats to scare low information voters. Additionally, they admit there’s absolutely zero proof the “assault weapons” ban had any impact on crime.

It was much the same in the early 1990s when Democrats created and then banned a category of guns they called ‘assault weapons.’ America was then suffering from a spike in gun crime and it seemed like a problem threatening everyone. Gun murders each year had been climbing: 11,000, then 13,000, then 17,000.

Democrats decided to push for a ban of what seemed like the most dangerous guns in America: assault weapons, which were presented by the media as the gun of choice for drug dealers and criminals, and which many in law enforcement wanted to get off the streets.

This politically defined category of guns — a selection of rifles, shotguns and handguns with “military-style” features — only figured in about 2 percent of gun crimes nationwide before the ban.

Handguns were used in more than 80 percent of murders each year, but gun control advocates had failed to interest enough of the public in a handgun ban. Handguns were the weapons most likely to kill you, but they were associated by the public with self-defense. (In 2008, the Supreme Court said there was a constitutional right to keep a loaded handgun at home for self-defense.)

Banning sales of military-style weapons resonated with both legislators and the public: Civilians did not need to own guns designed for use in war zones.

On Sept. 13, 1994, President Bill Clinton signed an assault weapons ban into law. It barred the manufacture and sale of new guns with military features and magazines holding more than 10 rounds. But the law allowed those who already owned these guns — an estimated 1.5 million of them — to keep their weapons.

The policy proved costly. Mr. Clinton blamed the ban for Democratic losses in 1994. Crime fell, but when the ban expired, a detailed study found no proof that it had contributed to the decline.

This stunning admission proves that the media and anti-gun Dems have deceived the American public for over 30 years, tricking them into allowing the assault ban to occur all in the name of “staying safe.”

It’s unlikely that this admission will change anything however, as a large percentage of American’s still by into the assault weapon myth.