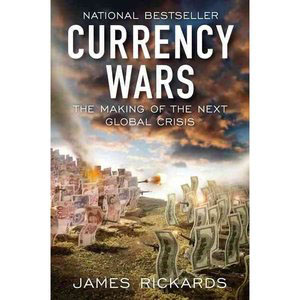 “Currency Wars – The Making of the Next Global Crisis” is a fascinating, must-read book for anyone who is a student of history or cares about our future.

Written by James Rickards and published in 2011, “Currency Wars” is one of the few books in my library that I find myself referencing (and recommending) on a frequent basis.

The book is divided into three main sections:

The first is a retelling of the author’s involvement in a government sponsored set of war games. This section is brief but important, setting the stage for the rest of the book by helping the reader understand the value of the topic, and of America’s vulnerability to currency manipulation.

The second section is a look at key historical developments of the last 100 years through the lens of various countries’ currency strategies. I found this section to be eye opening. I consider myself a student of history but had never realized the role currency manipulation played in some of the most important developments of the 20th century.

The final section of “Currency Wars” looks at the future. The author supposes three scenarios as possible endgames to the United States’ decision to go on a dollar printing spree.

Some in the prepping community seem to have great certainty about how they believe our economic future is going to play out. However, I’m not that certain about what’s coming next and I appreciated this book’s attempt at reasoning through several of the possibilities we may face.

Bottom line – this book deals with history, politics, international relations and economics. Given those topics, you’re probably not going to breeze through it during a leisurely night’s read. But, the effort is well worth it. This is a very important book and you need it in your library!