Home Survival Skills Are There Antidepressants In Your Drinking Water? 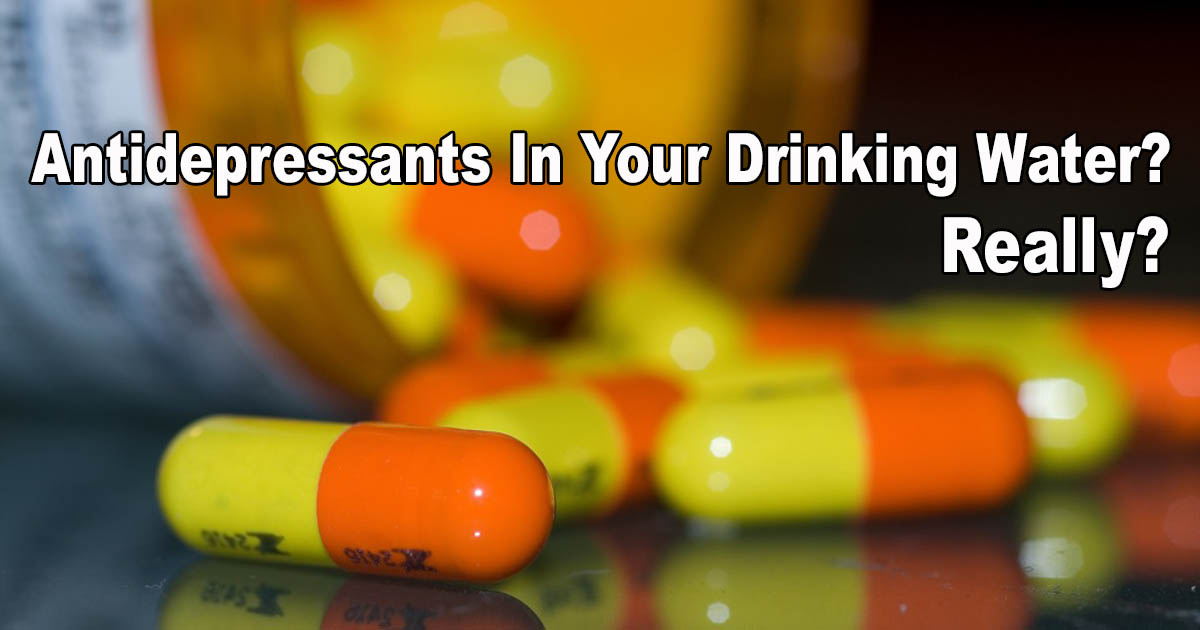 More than 30 million Americans are currently taking an antidepressant on purpose. It turns out, the rest of us may be taking these drugs without even knowing it!

Over the last 20 years, the use of antidepressants has absolutely skyrocketed (Zoloft and Lexapro are currently the most popular) with fully 10 percent of the population taking some form of these happy pills. The percentage is way higher for certain groups – if you are a woman in your 40’s or 50’s, forty percent of your cohort are taking an antidepressant.

If there’s that much of anything going into our bodies, you may wonder how much is leaving our bodies and entering our drinking water.

Turns out – that’s a really interesting question with a disturbing answer!

Quoting from a Harvard Health article, the problem is caused by (full article here):

The typical American medicine cabinet is full of unused and expired drugs, only a fraction of which get disposed of properly. Data collected from a medication collection program in California in 2007 suggest that about half of all medications — both prescription and over-the-counter — are discarded.

Chemicals also get into the water from the drugs we use. Our bodies metabolize only a fraction of most drugs we swallow. Most of the remainder is excreted in urine or feces (some is sweated out) and therefore gets into wastewater.

And, from the same article, the result of all this is:

A study conducted by the U.S. Geological Survey in 1999 and 2000 found measurable amounts of one or more medications in 80% of the water samples drawn from a network of 139 streams in 30 states. The drugs identified included a witches’ brew of antibiotics, antidepressants, blood thinners, heart medications (ACE inhibitors, calcium-channel blockers, digoxin), hormones (estrogen, progesterone, testosterone), and painkillers. Scores of studies have been done since. Other drugs that have been found include caffeine (which, of course, comes from many other sources besides medications); carbamazepine, an antiseizure drug; fibrates, which improve cholesterol levels; and some fragrance chemicals (galaxolide and tonalide).

Sewage treatment plants are not currently designed to remove pharmaceuticals from water. Nor are the facilities that treat water to make it drinkable.

So, what are all these fine drugs doing to us?:

It’s possible that there’s a cumulative effect on people from even tiny amounts of these and other pharmaceuticals in drinking water, but this hasn’t been proven. And perhaps vulnerable populations (pregnant women, people with disabilities) are affected, although that’s also unproven.

In contrast to the uncertainty about human health effects, there’s quite a bit of evidence for pharmaceuticals in the water affecting aquatic life, particularly fish. Numerous studies have shown that estrogen and chemicals that behave like it have a feminizing effect on male fish and can alter female-to-male ratios. Sources of estrogen include birth control pills and postmenopausal hormone treatments, as well as the estrogen that women produce naturally and excrete. Intersex fish — creatures with both male and female sex characteristics — have been found in heavily polluted sections of the Potomac River. Studies of fish upstream and downstream of wastewater treatment plants have found more female and intersex fish downstream from the plants, presumably because of the higher estrogen levels in the downstream water. Other research has uncovered popular antidepressant medications concentrated in the brain tissue of fish downstream from wastewater treatment plants.