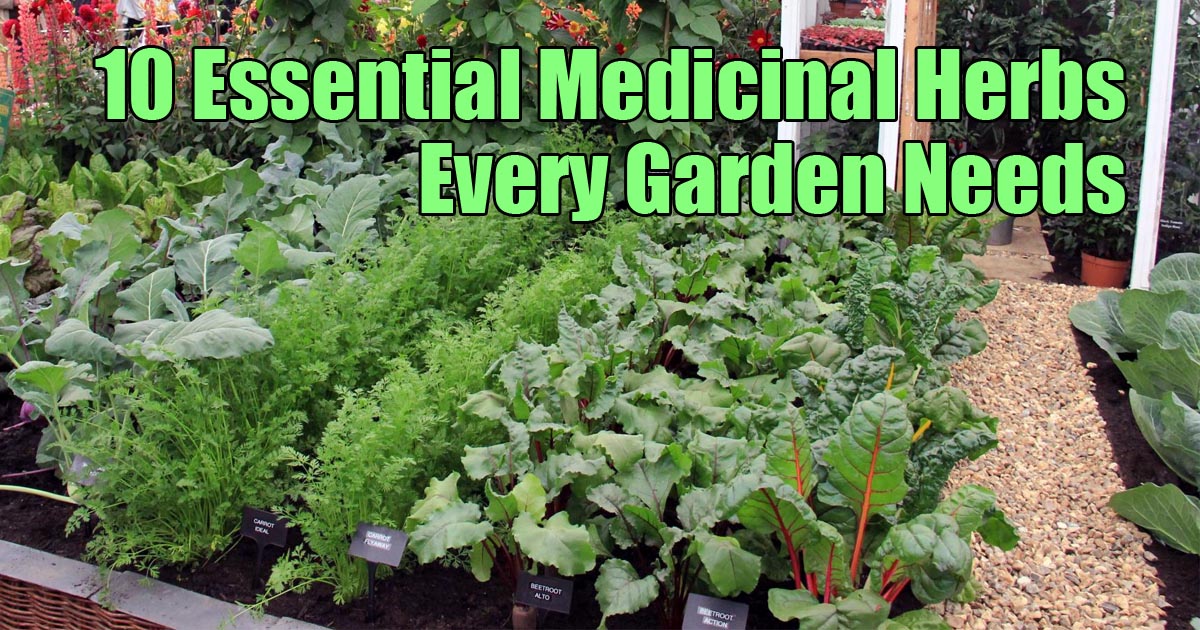 We wanted to offer you a list of our ten favorite medicinal herbs that any serious homesteader should have in their garden.

Calendula is native to southwestern Asia, Western Europe, Macaronesia, and the Mediterranean.

The oil can be used as an anti-inflammatory, an antitumor agent, and a remedy for healing wounds. Studies suggest that its extracts have antiviral, antigenotoxic, and anti-inflammatory properties in vitro. Applied as an ointment, it has shown to prevent dermatitis, pain, and missed radiation treatments.

Peppermint may be the most familiar herb on our list as it’s a popular ingredient in foods and desserts. It is a hybrid mint, crossed between watermint and spearmint. Originally from Europe and the Middle East, you can now find it in most regions of the world.

As an oil, peppermint has been used internally as an antispasmodic and shows promise to treat irritable bowel syndrome, catarrh of the respiratory tract, and inflammation of the oral mucosa. Peppermint oil may also act as an antibacterial. Used externally, peppermint oil can be used to treat muscle pain and nerve pain.

Comfrey is native to Europe, typically found in damp, grassy places like river banks and ditches.

Comfrey has widespread historical use with a longstanding reputation as a therapeutic herb.It’s been historically used to treat a wide variety of ailments ranging from bronchial problems, broken bones, sprains, arthritis, gastric and varicose ulcers, severe burns, acne and other skin conditions.

Lavender can be found from Cape Verde and the Canary Islands, Europe across to northern and eastern Africa, the Mediterranean, southwest Asia to southeast India.

It was commonly used in hospitals during World War I. A study published in 2010 showed meaningful efficacy in alleviating anxiety and related sleep disturbances. Another study published in 2013 stated that “there is growing evidence suggesting that lavender oil may be an effective medicament in the treatment of several neurological disorders.”

Rosemary is a woody, perennial herb with fragrant, evergreen, needle-like leaves and white, pink, purple, or blue flowers, native to the Mediterranean region.

Rosemary has traditionally been used as an anti-bacterial, anti-fungus, anti-parasitic remedy. It has also shown promise to reduce itching, and improve circulation, as well as relieving muscle pain from arthritis.

Hyssop is native to Southern Europe, the Middle East, and the region surrounding the Caspian Sea.

The herb has soothing, expectorant, and cough suppressant properties. The chemicals thujone and phenol, give it antiseptic properties. Its high concentrations of thujone and chemicals that stimulate the central nervous system can provoke seizures when taken in high enough doses. Small doses (2-3 drops) has been shown to cause convulsions in children.

St. John’s Wort is best known for it’s effectiveness against mild depression. Also, the herb works excellent for healing and cooling burns, cuts, and bruises. As an oil, St. John’s Wort can be used to make a salve for the treatment of sunburns. It can be infused within tea to help treat insomnia.

Marsh-Mallow (not to be confused with the spongey, sugary confection) is a perennial species indigenous to Europe, Western Asia, and North Africa. Almost every part of the herb has medicinal properties, including the leaves, flowers, and roots.

It’s widely used as a treatment for a sore throat. A study on rats concluded that an extract from the flowers has potential benefits for hyperlipidemia, gastric ulcers, and platelet aggregation.[7] The root has been used since the Middle Ages in the treatment of a sore throat.

The name Arnica is derived from the Greek word meaning “lamb,” in reference to the plant’s soft, hairy leaves.

It has been popularly used for many years as an oil for treating muscle strains, bruises and swelling. Today, commercial Arnica is frequently used by professional athletes. According to The Memorial Sloan-Kettering Cancer Center, “A few clinical trials suggest benefits of topical arnica for osteoarthritis; and for affecting significant reduction of bruising compared to placebo or low concentration vitamin K ointments.”

Due to the herbs toxicity, however, you should never ingest Arnica as it can be fatal.